Wrangling rambunctious children is a struggle every parent knows all too well, even those of an ursine nature.

A mama bear was filmed repeatedly crossing a road in Winsted, Connecticut, on Saturday in an attempt to shepherd her four cubs to the other side. In several videos shared by the YouTube account ViralHog, the mother bear spent around 20 minutes trying to get all her cubs across.

“First I thought one baby had been struck by a car, came back 15 minutes later realize mama was simply trying to get all four babies to cross the street, together,” one person told ViralHog. “I can relate as a mom of four myself.”

She was partially successful after carrying one cub over in her teeth, with two other cubs eventually following her. The fourth cub remained behind, more interested in climbing a nearby pole than following its mother.

The mother returned to grab her wayward cub but was unfortunately followed by one of her other children. At one point, the mother bear alternated between carrying one cub or the other in an almost futile attempt to get them across — as she picked up one cub, the other began to walk back.

Eventually, she was able to safely get all of her cubs across the road. 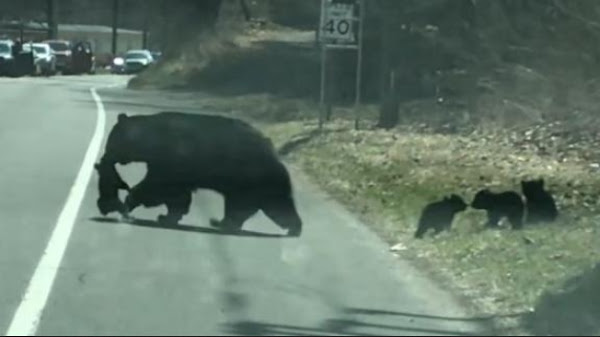 Eventually, she was able to safely get all of her cubs across the road.

Many people also applauded the drivers who patiently waited for the wildlife moment to unfold and “didn’t risk the lives of mom and her cubs.” We also spotted a police cruiser on the scene at the end of the video, who no doubt help control traffic and make sure both bears and humans stayed safe!